from The Law Of Attraction

Do you want to amplify your manifestation results exponentially? Go watch this video now…

The Secret Behind “Heart Manifesting” (Video)

Are you looking for some inspiration? Perhaps you are lacking motivation at the moment and sometimes you look to others for encouragement?

Who better to share some inspirational quotes from than the incredible Stephen Hawking.

Who Is Stephen Hawking?

Stephen Hawking was an English cosmologist, author, theoretical physicist as well as the Director of Research at University of Cambridge’s Centre for Theoretical Cosmology.

Stephen Hawking was known for his groundbreaking work with relativity and black holes. He also became the author of many science books, including the bestseller: ‘A Brief History of Time’, which sold over 10 million copies in 20 years.

Not only was Stephen an intelligent and noble man, but he also fought a life-changing disease. At the age of 17, Stephen was diagnosed with Motor Neurone Disease, and the doctors gave him 2 and a half years to live.

Despite this, Stephen married, had three children with Jane Wilde and graduated University with honors.

At the age of 76, Stephen passed away after the long battle with the rare form of motor neurone disease. It’s safe to say that Stephen Hawking is an incredibly inspiring and motivating man.

Let’s take a look at some of his greatest quotes to help you stay motivated and achieve your dreams.

Many people have tried to describe the deep and intense feelings of depression throughout the years, usually through creative outlets like poetry, music, art and, film.

It was none other than Stephen Hawking who made this powerful speech to the Royal Institute in London, England, as he compared the mental illness to black holes:

“The message of this lecture is that black holes ain’t as black as they are painted. They are not the eternal prisons they were once thought. Things can get out of a black hole both on the outside and possibly to another universe. So if you feel you are in a black hole, don’t give up; there’s a way out.”

With a little bit more research on black holes, this analogy is very accurate and, potentially, helpful to anyone currently suffering from mental illness.

“A black hole is a place in space where gravity pulls so much that even light can not get out. Because no light can get out, people can’t see black holes. They are invisible.”

With stigma still surrounding mental health issues, people often feel invisible in their struggle. Hawking’s, however, described how that no matter how invisible or trapped you feel, there is always a way out of the darkness.

On Disability And Mental Health

Also part of the 2016 Reith Lectures program, Hawking was asked a series of questions, one of which directly asked him about his personal struggle with Motor Neurone Disease.

A 17-year-old asked him, “What inspired you to keep on going despite all the rough times in your life?”.

“I think my work and a sense of humor have kept me going. When I turned 21 my expectations were reduced to zero.

You probably know this already because there’s been a movie about it. In this situation, it was important that I came to appreciate what I did have.

Although I was unfortunate to get motor neurone disease, I have been very fortunate in almost everything else. I have been lucky to work in theoretical physics at a fascinating time, and it’s one of the few areas in which my disability was not a serious handicap.

It’s also important not to become angry, no matter how difficult life may seem, because you can lose all hope if you can’t laugh at yourself and life in general.”

1. “One, remember to look up at the stars and not down at your feet. Two, never give up work. Work gives you meaning and purpose, and life is empty without it. Three, if you are lucky enough to find love, remember it is there and don’t throw it away.”

2. “Intelligence is the ability to adapt to change.”

3. “The past, like the future, is indefinite and exists only as a spectrum of possibilities.”

4. “However difficult life may seem, there is always something you can do and succeed at.”

5. “I have noticed that even those who assert that everything is predestined and that we can change nothing about it still look both ways before they cross the street.”

6. “It is no good getting furious if you get stuck. What I do is keep thinking about the problem but work on something else. Sometimes it is years before I see the way forward. In the case of information loss and black holes, it was 29 years.”

7. “I am just a child who has never grown up. I still keep asking these ‘how’ and ‘why’ questions. Occasionally, I find an answer.”

8. “So next time someone complains that you have made a mistake, tell him that may be a good thing. Because without imperfection, neither you nor I would exist.”

9. “I have lived with the prospect of an early death for the last 49 years. I’m not afraid of death, but I’m in no hurry to die. I have so much I want to do first.”

10. “My goal is simple. It is a complete understanding of the universe, why it is as it is and why it exists at all.”

Do you want to amplify your manifestation results exponentially? Go watch this video now.

The Secret Behind “Heart Manifesting” (Video) 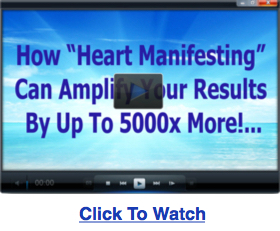